Work Your Core in Just 10 Minutes with this Ab Workout! 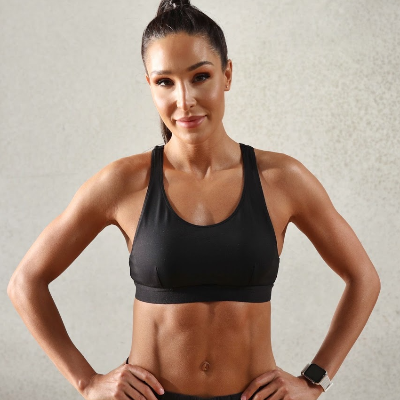 Work Your Core in Just 10 Minutes with this Ab Workout!

Ladies, you are going to LOVE this 10 minute ab workout! It requires no equipment and you can follow along with me for the whole workout.

All you will need for this 10 minute ab workout is the space of your towel or mat, you can do it anytime, anywhere.

If you are looking to build core strength, then this 10 minute ab workout is for YOU!

Here is the workout:

I’m Kayla, personal trainer and co-founder of SWEAT. I gained my qualifications in 2008 and started my career as a personal trainer for women. My goal has always been to empower women by giving them the practical tools they need to improve their health and fitness, and feel more confident.

I joined Instagram in 2009 and started sharing my client’s success stories, which quickly gained worldwide attention. Community demand led me to create my groundbreaking, globally renowned 28-minute workout program as an eBook, Bikini Body Guide (BBG) in 2014. My first BBG program, which is still available today, provides an efficient and effective training style — you can work out two to three times a week and achieve your fitness goals. This training philosophy is the foundation of all my BBG programs.

In 2015, I did a record-breaking World Tour with my Bootcamps, where I became the first person to train 30,000 women in person. It was such an incredible experience to meet so many members of the BBG Community, and to hear how fitness had built not only their strength, but their confidence too.

The Sweat with Kayla app launched in 2015 with my BBG program. Within a year of release, it reached #1 in the App Store in more than 142 countries.

The app became SWEAT in May 2017, with personal trainers Kelsey Wells and Sjana Elise joining the SWEAT team with their programs PWR and BAM (Body and Mind). In response to requests from the community, I also launched BBG Stronger, my gym-based weights program.

In December 2018, I welcomed trainers Chontel Duncan and Stephanie Sanzo to the team, adding their programs FIERCE and BUILD to SWEAT.

In 2019, after the birth of my daughter Arna, I launched my program for postpartum women, Kayla Itsines Post-Pregnancy.

Realising women needed more options for training at home, I released my BBG Zero Equipment program on SWEAT in August 2020. Women from the BBG Community around the world completed over 1.3 million workouts from the no-equipment program in the three months after it was released — which is incredible!

I want to give women even more variety in their fitness journey, so in November 2020 I welcomed yoga instructors Ania Tippkemper and Phyllicia Bonanno, and barre instructor Britany Williams, to the SWEAT team.

The BBG Community has grown since my first Instagram post in 2009 to more than 40 million followers across my social media accounts. It’s now a community of incredible women from all over the world, who provide support to each other on their health and fitness journeys.

Sweat recognises that all women want flexibility, variety and support to reach their OWN health and fitness goals. We have high-intensity, weights, powerlifting, yoga and post-pregnancy programs available to suit each woman's needs.

I've been called a Top Fitness Influencer by Forbes and one of Time’s Most Influential People on the Internet.